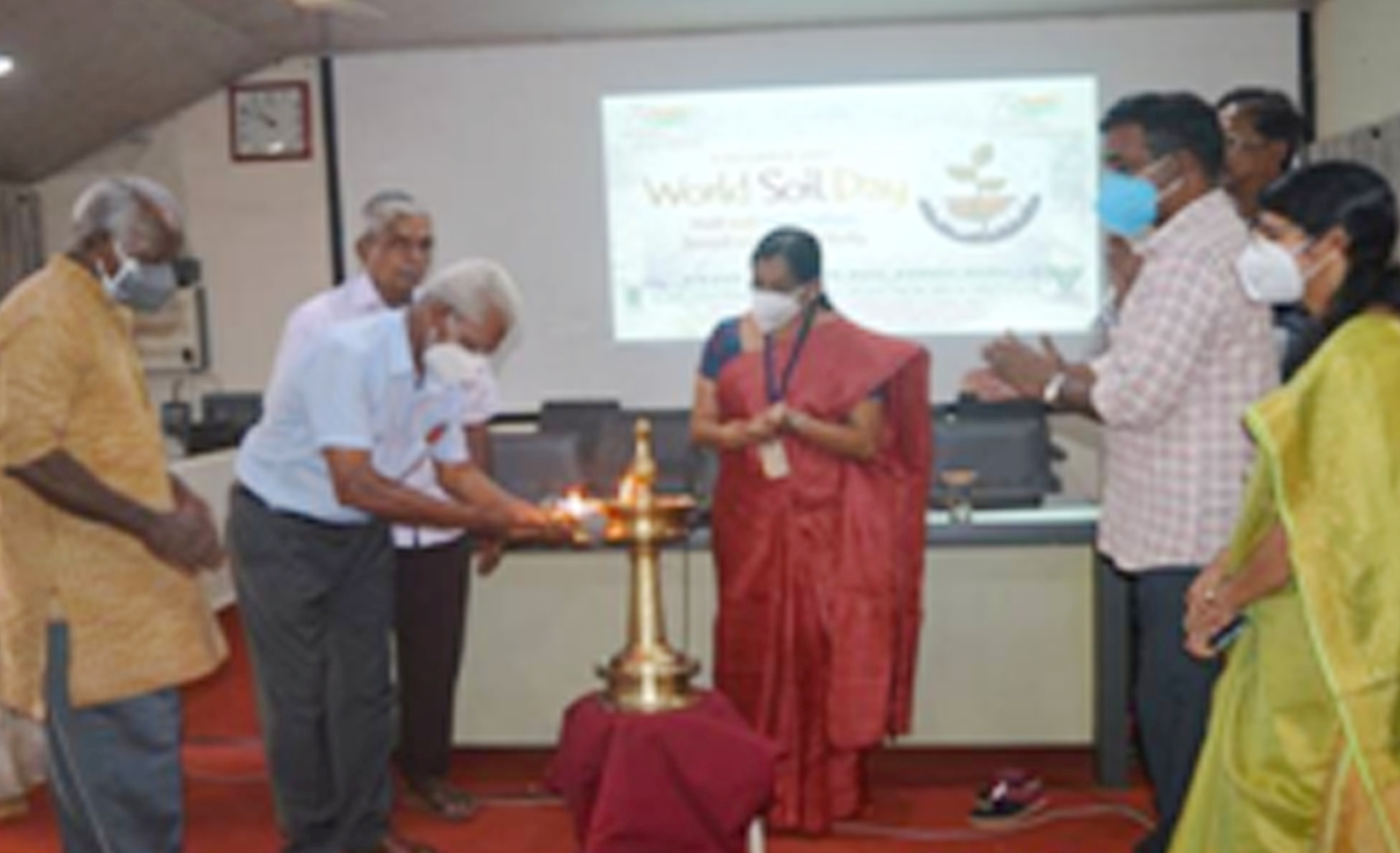 An interactive workshop on ‘Halt soil Salinisation, Boost Soil Productivity’ was conducted at ICAR-CPCRI, RS, Kayamkulam as part of the World Soil Day celebrations on 6/12/2021. The programme was aimed at creating awareness about the necessity of preserving the pristine nature of soil, the dynamic natural entity.

The inaugural session was marked by the active participation of the farmers from 11 villages of Alleppy district coming under the Mera Gauv Mera Gaurav programme. Dr. A. Joseph Rajkumar, Principal Scientist welcomed the gathering. The programme was formally inaugurated by Dr. S. Kalavathi, Acting Head, ICAR-CPCRI, RS, Kayamkulam. Two senior citizen farmers also lighted the lamp. In her inaugural address Dr. S. Kalavathi highlighted the dynamic role of soil on sustaining the ecological balance. She shared the concern on the impact of climate change, particularly that of the erratic rainfall on soil health and productivity and exhorted the farmers to adopt the management practices which are resilient to climate change as well as protecting the soil health.

The keynote address was delivered by Dr. Thomas Mathew, Professor and Head (Retd.), Kerala Agricultural University on the topic : Management of soil productivity with special emphasis on problem soils. Aspects regarding the types of soils in Kerala, major constraints hindering its productivity, methods to increase the organic matter content, crop residue recycling, methods of preparing Panchagavya, Dasagavya and other organic preparations to boost up the microbial activity. Various queries posed by the farmers on pest and disease management, liming and nutrient management were addressed by the scientists.

Soil health cards depicting the parameters such as pH, Organic carbon, available phosphorus, potassium, calcium, magnesium, iron, manganese, copper, zinc and boron, their status in the soil and ways to manage their availability to boost up the production were distributed to the farmers of the MGMG villages.

Dr. Abdul Haris Principal Scientist (Agronomy) emphasized the role of soil health management as a legacy to be treasured for the generations to come. Dr. Jeena Mathew, Sr. Scientist (Soil Science) explained the parameters and suggested suitable measures for soil health management in the MGMG villages. Visit to the experiment plots were conducted under the leadership of Dr. A. Joseph Rajkumar, Principal Scientist (Ag. entomology) and the farmers were sensitized with various ongoing technologies.