The Coconut Research Station at Kasaragod in Kerala was initially established in 1916 by the then Government of Madras and subsequently it was taken over by the Indian Central Coconut Committee in 1948. Central Plantation Crops Research Institute (CPCRI) was established in 1970 as one of the agricultural research institutes in the National Agricultural Research System (NARS) under the Indian Council of Agricultural Research (ICAR). The Institute had the mandate to undertake research on coconut, arecanut, cocoa, cashew, oil palm and spices at the time of establishment. The research on cashew, oil palm and spices were later delinked from CPCRI to form separate institutes. The present mandate of the institute is to conduct research on coconut, arecanut and cocoa.

The present organizational set up of the Institute with headquarter at Kasaragod, Kerala, Regional Stations at Kayamkulam (Kerala), Vittal (Karnataka) and Research Centres at Kahikuchi (Assam), Mohitnagar (West Bengal) and Kidu (Karnataka) caters to the research needs of the mandate crops at the National level. The research programmes of the institute are organized under five divisions viz. Crop Improvement, Crop Production, Crop Protection, Physiology, Biochemistry and Post Harvest Technology and Social Sciences. The Institute also holds the International Coconut Gene Bank for South Asia at Kidu in Karnataka. The Institute also serves as the headquarters of All India Co-ordinated Research Project (AICRP) on Palms with 28 centres, which are located in 14 states and one union territory covering 13 SAUs/SHUs, one CAU and four ICAR institutes

CPCRI Headquarter is located at Kasaragod district of Kerala which lies in the heart of the major coconut growing areas of the country. CPCRI is 5 km away from Kasaragod and 51 kms away from Mangalore on the Mangalore-Kasaragod road. Nearest railway station is Kasaragod about 5 Km and nearest airport is Mangalore about 60 Km. Geographically it is situated at 12.528 N latitude and 74.969 E longitude with an altitude of 10.7m above MSL.

Presently, the centre is having a total of 77.71 hectare of land with coconut as main crop 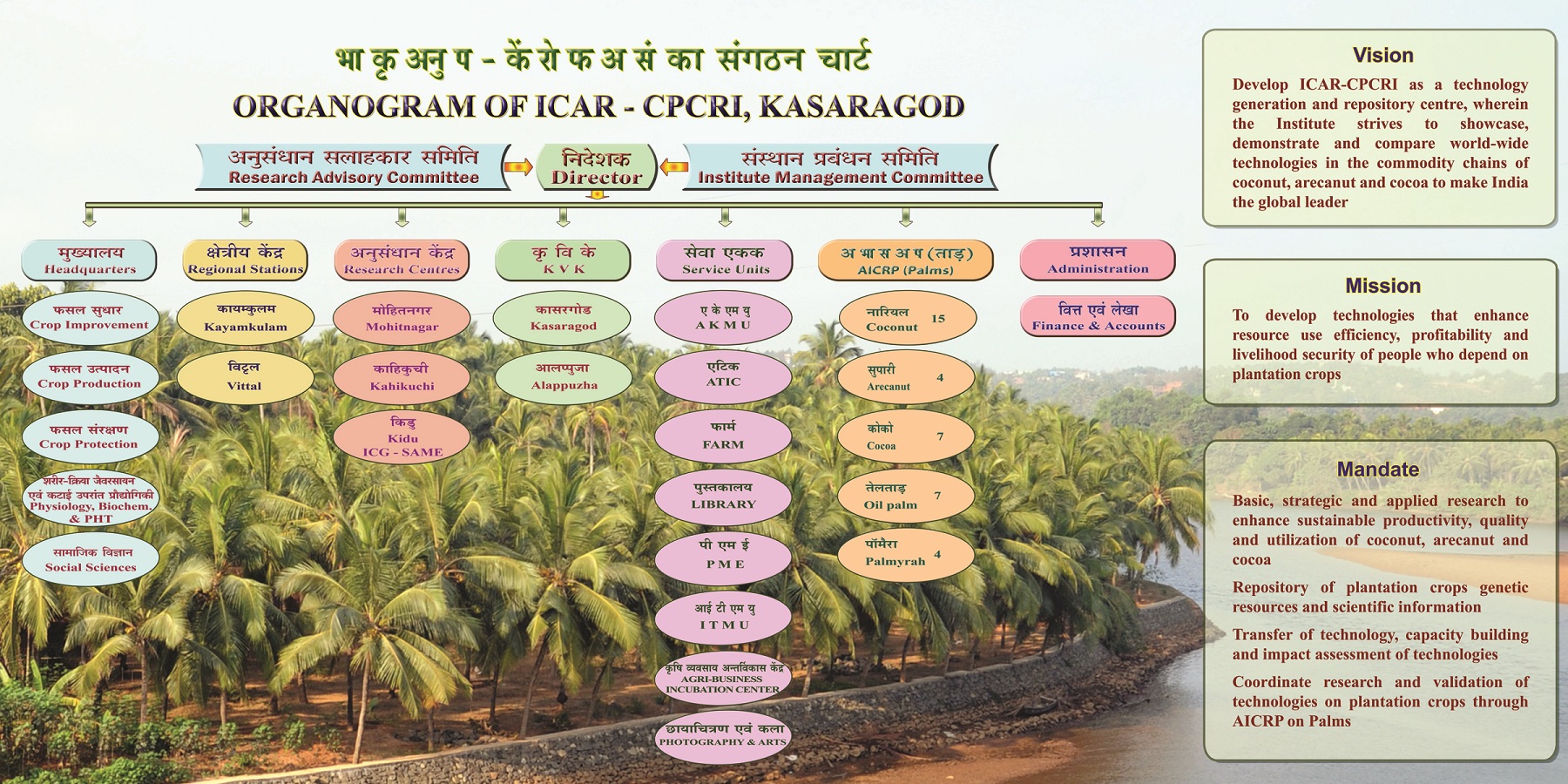