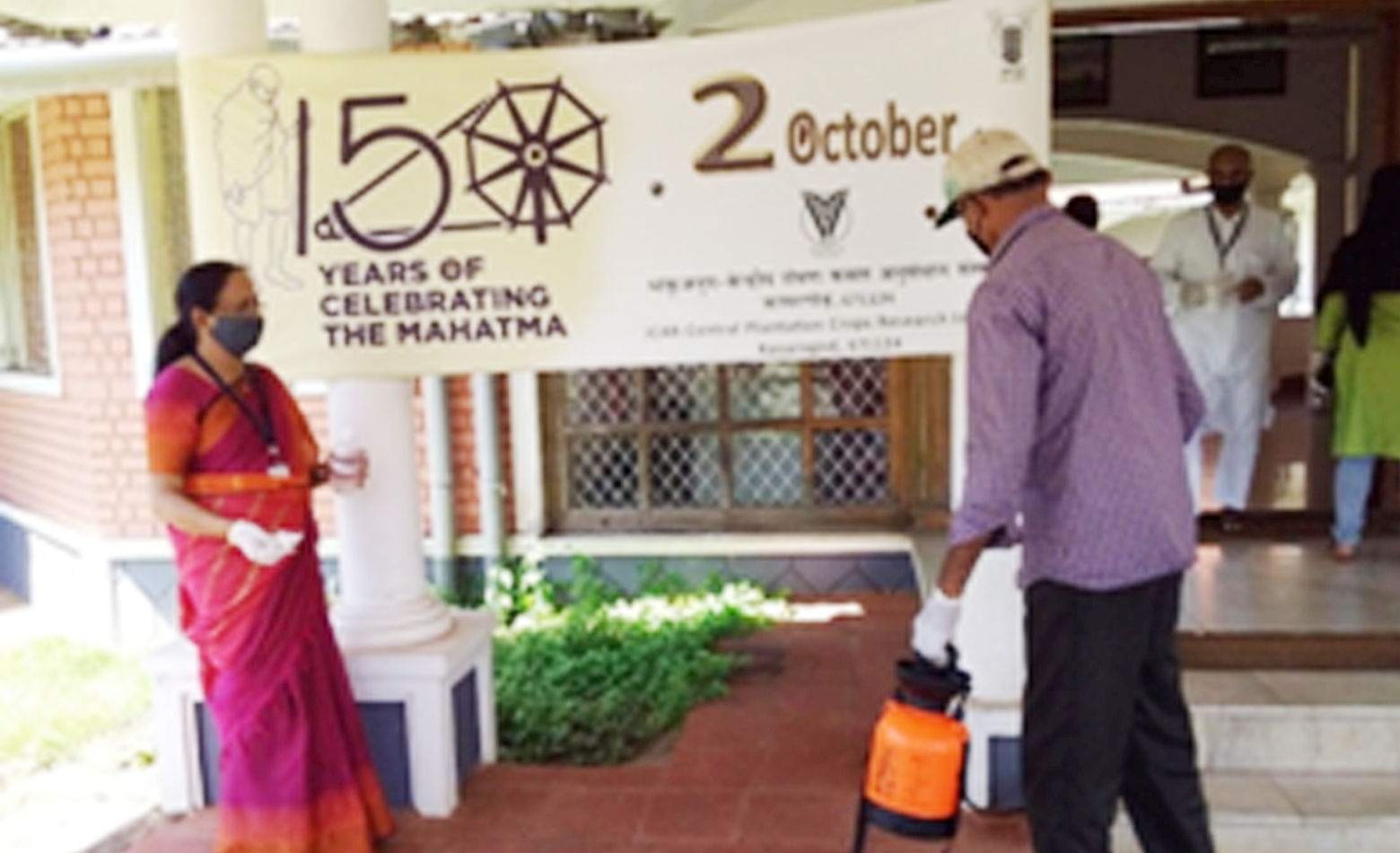 As directed by the Council and apropos ICAR-Central Plantation Crops Research Institute (ICAR-CPCRI), Office Order E.F. No 11(9): Celebrations/2020 Estt-dated 25/09/2020 a committee was constituted Kasaragod to conduct various activities and programmes to commemorate and celebrate the 150th Birth Anniversary of Mahatma Gandhi, father of our nation in a befitting manner. Accordingly the following action plan and programmes were decided.

Lecture on “Poverty and Hunger through the prism of Gandhian Principles”

A special lecture was organized by ICAR-Indian Institute of Millets Research (ICAR-IIMR), Hyderabad as a component of their week-long virtual celebrations to commemorate the 150th Birth Anniversary of Mahatma Gandhi. Director, Scientists and staffs of ICAR-CPCRI also took part in the proceedings of the lecture which was delivered by Dr. V. Rajagopal, Former Director, ICAR-CPCRI, Kasaragod. The programme witnessed a considerable reception among the audience since the renowned speaker elucidated the current status of poverty and hunger around the world and India and the relevance of Gandhian principles in tackling these problems. It was followed by question and answer session.

A viA video contest entitled “Stay safe” was organized for the scientists and staff of ICAR-CPCRI including their family members in order to document the simple, effective protocols and daily hacks one would follow at home to stay safe and clean in the wake of pandemic COVID-19. This contest also evoked huge response among the members of CPCRI community and participants have uploaded videos describing their novel and practical ways of tackling this Coronavirus menace. The best videos among them were adjudged for cash prizes and winners were announced during the Oct 2nd Gandhi Jayanthi celebrations.

A digital workshop on “Cleanliness and rural development through Gandhian ideologies:

Sri. K.G. Jagadeesan, National Committee Member, Gandhi Smaraka Nidhi delivered the key note address in the workshop. A noted Gandhian and a Social Activist, he made the audience travel through the path of cleanliness and rural development so as to reach Gandhiji’s dream of “Clean India”.

The Gandhi Jayanthi celebrations of the RS were continued by a composting drive using weed biomass in concrete bins, with the participation of staff members. Waste recycling and reducing the input cost is indeed a crop production strategy in line with Gandhian ideas. 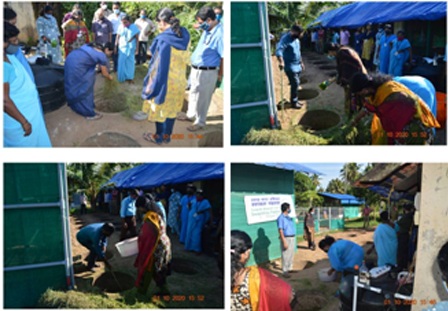 Quiz programme for the Scientists and staff of ICAR-CPCRI

A quiz programme was organized for the Scientists and staff of ICAR-CPCRI, HQrs under a theme “Swacch Bharath Abhiyan” on 02nd Oct, 2020 from 3:30 to 4:00 PM. The basic idea of this programme is to inculcate the features of Swacch Bharath Abhiyan among the participants along with Gandhian ideologies to strengthen the clean India campaign. This programme witnessed the participation of all categories of employees of ICAR-CPCRI since scientists, technical, administrative and supporting staff took part in the proceedings which was held at PJ Hall, ICAR-CPCRI. The winners of the competition were declared and certificates were issued during Oct 2nd Gandhi Jayanthi celebrations.

All those aforementioned programmes culminated in the celebrations of Gandhi Jayanthi on Oct 2nd at Institute. On this day A Pledge Taking Ceremony was held wherein our beloved Director, Dr. Anitha Karun administered the pledge (Swacchtha Sapath) to the Scientists, Technical, Administrative and Supporting staffs of ICAR-CPCRI. All the staff members of the Institute including Heads of the Divisions, Scientific, Technical, Administrative and Supporting Staff attended the function held at 10:30 AM at Institute’s DJ Hall either in person or through online mode. It was followed by the distribution of prizes for the winners of the various competitions that were held during the week. Scientists from ICAR-DCR, Puthur have also joined the celebrations through online mode.

A sanitization drive was organized immediately after the conclusion of formal function. The ATIC building at the entrance and Centenary Building premise of the Institute have undergone an immense facelift due to this sanitization drive and active participation of the members of the CPCRI family. The photographs and video clippings pertaining to this campaign are archived in ICAR-CPCRI library.

Elocution competition: “My contributions to Swaccha Bharath and my vision”

An elocution competition was organized for the students of ICAR-CPCRI Kendriya Vidhyalaya-I (Class VIII to Class XII) on 04th Oct, 2020. The title of the speech was “My contributions to Swaccha Bharath and my vision”. This programme too has witnessed the participation of 11 enthusiastic students. Students were describing their vision of Swacch Bharath and suggested some novel approaches including ways to reduce, reuse and recycle harmful plastics, effective utilization of social media in educating the uninitiated etc. Best presentations for first three positions were adjudged and certificates were issued.