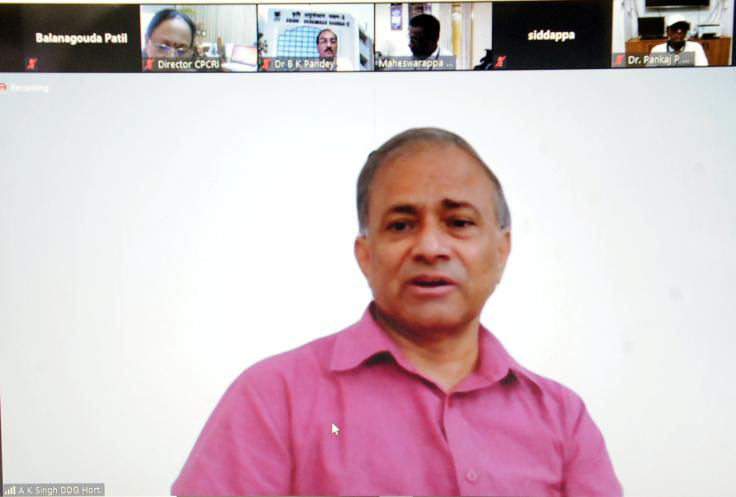 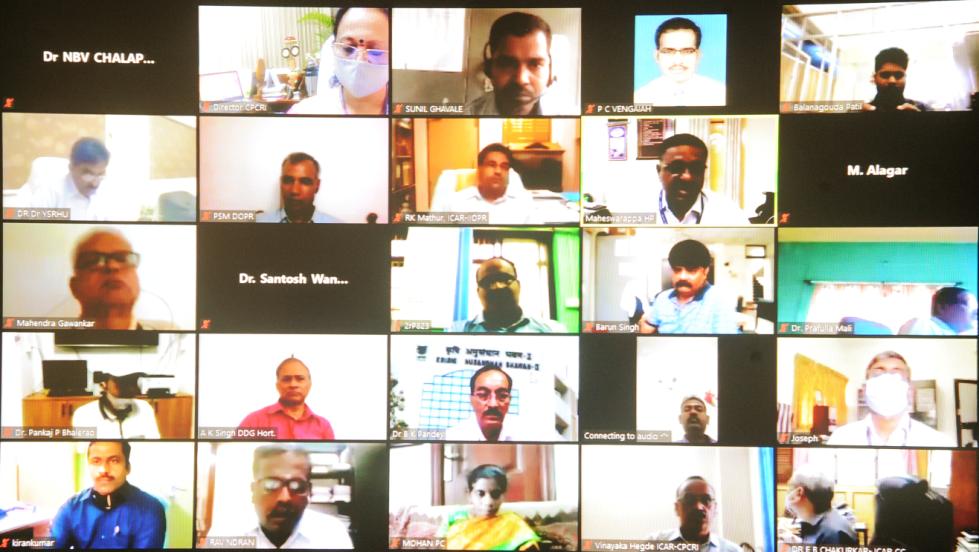 In his inaugural address, the honorable Deputy Director General gave a bird's eye view of the overall growth of horticultural sector and its significant contribution to GDP and nutritional security of the nation with special emphasis on oil palm. He hinted that carbon sequestration potential of palms may be explored, to take over research forward in the era of climatic vagaries. He underlined the need for developing high yielding varieties, user friendly technologies for the betterment of the farm front and to connect ourselves with the farmers with benefitting technological outputs. He portrayed that adoption of remunerative location specific intercrops and integration of animal enterprises in coconut ecosystem through IFS approaches can help farmers to realize better income than sole cropping. He noted the fluent financial grants of Government of India for Agricultural sector, with gratitude. In the backdrop of COVID pandemic, he inspired the palm scientists and invited them to explore every possibility to reach the pinnacle of success in Palm research by advocating the farmers on diverse avenues for revenue generation with technological platform.

The Assistant Director General highlighted that all the research a programme of AICRP (Palms) needs to be tailored to go in tandem with the present extra–ordinary situation. Dr. Anitha Karun, Director (CPCRI), Kasaragod welcomed the dignitaries and delegates in which she applauded the positive concern of the Deputy Director General over the health of the palm scientists across the nation.

Dr. H. P. Maheswarappa, Project Co-ordinator, AICRP (Palms), briefed about activities of project dealing with the mandate crops such as coconut, oil palm, palmyrah, arecanut and cocoa distributed across 28 AICRP centres of 14 states and one Union Territory with collaboration of 13 SAUs, four ICAR institutes and one CAU. He enlisted that Impact assessment of cyclone hit areas in the Western Ghats of the country, Management of the debilitating pests of coconut - Rugose Spiraling Whitefly employing the parasitoid Encarsia guadeloupe and Development of Multi-tier and Integrated Farming System models are the noteworthy contributions of AICRP (Palms). Effective Transfer of Technology from lab to land through diverse tools and modes remain the major strength of this AICRP programme.

The crops experts also provided their valuable suggestions / recommendations for further improving the efficacy of the AICRP on Palms. The detailed progress made during 2019-20 was presented and the technical programmes for ensuing next year were finalized during the Webinar. A total of 70 participants from various parts of the country participated in the Virtual Meeting including scientists from AICRP centres and ICAR institutes. During the meet, three technologies were recommended for release to the farming community.