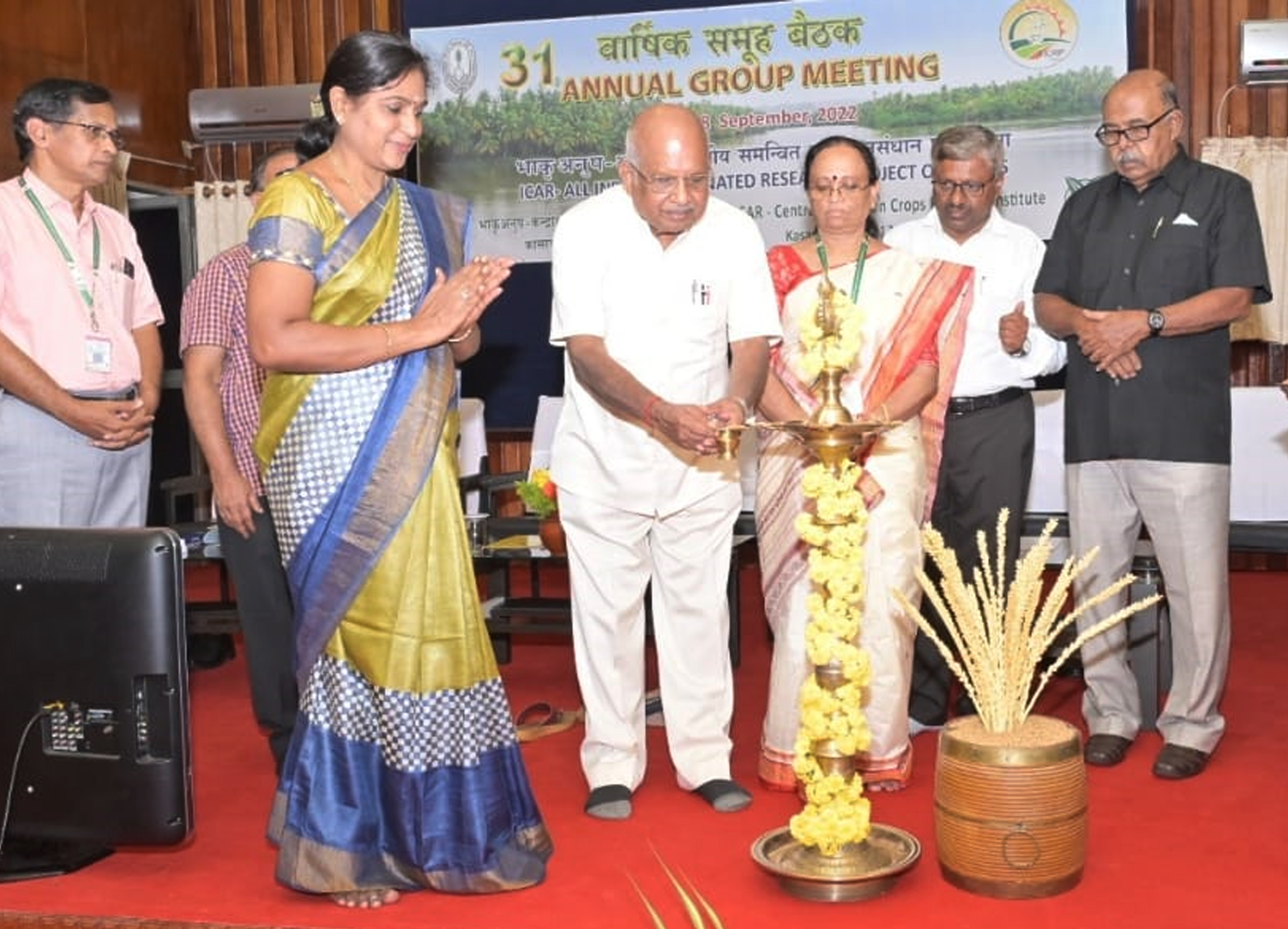 Dr. Ravi Bhat, Acting Head (Crop Production) and Scientist in-charge, Project Co-ordinator Cell, CPCRI, Kasaragod welcomed the dignitaries and delegates in which he highlighted the yeomen service and spade work of the Former Project Co-ordinators of AICRP (Palms) in moulding the programme to hit several milestones in the Plantation Crops Sector. The Project Co-ordinator presented a brief note on the mission of the Project Directorate since its genesis in 1972 on five mandate crops - Coconut, Oil palm, Palmyrah, Arecanut and Cocoa distributed across 28 AICRP centres of 14 States, 13 State Agricultural Universities, 4 ICAR institutes and one Central Agricultural University of the nation. He opined that the release of Oil plam variety NRCOP – 4, identification of the precocious coconut hybrid Godavari Ganga and Tall x Tall hybrid combinations of coconut, Coconut based multispecies cropping system models in transformation of unproductive ecosystems to vibrant environment, Integrated Nutrient Management for higher productivity and profitability of dwarf coconut, Development of location specific Integrated Farming System models, Integrated Pest and Disease Management modules for the management of stem bleeding, leaf blight and Rugose Spiraling Whtiefly in coconut stands testimony to the work of AICRP (Palms). Intercropping of Burmese Coriander in Arecanut System, multiplication of superior cocoa clones VTLCH 7 and 14 for planting material production to cater the need of North East India and export of a consignment of Dehydrated tuber and tuber flour of Palmyrah to UK were underlined by him. Taking technology to the farmers’ door steps and to the technologically deprived through series of trainings under SCSCP / TSP mission, supply of biocontrol agents to curb pest and disease menace, supply of elite seedlings of plantation crops remain added strength of the programme.

Dr.V.Geethalakshmi, Vice Chancellor, TNAU, Coimbatore in her Inaugural Address applauded AICRP (Palms) for the release of 21 varieties of coconut and 11 varieties of arecanut and a bouquet of crop production technologies towards improving the standard of living of the plantation crop growers. Non scientific management and senile palms remain major impediments in achieving higher productivity. She also emphasized the need for developing varieties tolerant to pests, diseases and to weather extremities. She invited the palm researchers to enlighten the farmers on crop diversification and value addition to overcome the frequent depression in price chart of copra and also to devise strategies to enhance water use efficiency. She outlined the scope for oilpalm and palmyrah and hinted the need for Mechanization and Artificial Intelligence with robotics and sensors in the era of labour scarcity. Following the Inaugural Address, Dr.P.Rethinam, Founder Director, IIOPR, Pedavegi in his Golden Jubilee Lecture “Reminiscences on Research Imprints of AICRP (Palms)” listed the glorious achievements of AICRP (Palms) in its 50 years journey in terms of release of improved varieties catering to the demands of the farmers, path breaking research technologies like Cropping Systems Approach, Eradication of Tatipakka disease in Andhra Pradesh and effective management of Basal Stem Rot of Coconut. He set forth the need for establishment of Centre of Excellence in Palmyrah as this drought hardy crop provides livelihood security to the rural unemployed. He congratulated all the torch bearers of the AICRP (Palms) scheme for placing the programme in the pinnacle of grandeur.

Dr. H. Hameed Khan, Former Project Co-ordinator in his felicitation appreciated the rigorous efforts of palm scientists in addressing location specific problems and for improving the production base. He rolled out a red carpet to intensify research in value addition of coconut. Dr.S.Arulraj, Former Director, IIOPR in his felicitation expressively looked back the social concern of the palm scientists in overriding the emotional setbacks of the farmers in the events of natural disasters. Dr.H.P.Maheswarappa, Former Project Co-ordinator, AICRP (Palms) and Director of Research, University of Horticultural Sciences, Bagalkot attributed the accolades like Best AICRP Centre of ICAR during 2015 and ‘OUTSTANDING’ rank of Quinquennial Review Team of 2020 to the exemplary guidance of the predecessors together with the industrious efforts of the palm scientists garnished with enthusiasm across the nation.

Dr. Anita Karun, Director, CPCRI and Project Co-ordinator (Acting), AICRP (Palms) in the Presidential Address extended profuse gratitude to the entire palm scientists for the achievements of AICRP (Palms) which helped transform the lives of the palm growers towards economic prosperity. She also wished that all the palm scientists should join hands to take the AICRP (Palms) programme and plantation crops sector to greater heights in the nation. The inaugural session concluded with the formal vote of thanks by Dr.P.Subramanian, Principal Scientist (Agronomy), CPCRI, Kasaragod. About 100 participants from across different AICRP centres of the nation attended the Annual Group Meet. Navsari Centre, Gujarat received the Best AICRP (Palms) Centre Award for the year 2021. Bouquet of publications in terms of Technical Bulletins, booklets and folders prepared by the palm scientists were released in the event. The inaugural session was followed by technical sessions on Genetic Resources and Crop Improvement, Crop Production, Crop Protection and Post Harvest Technology.

During the meeting three coconut varieties were recommended for release 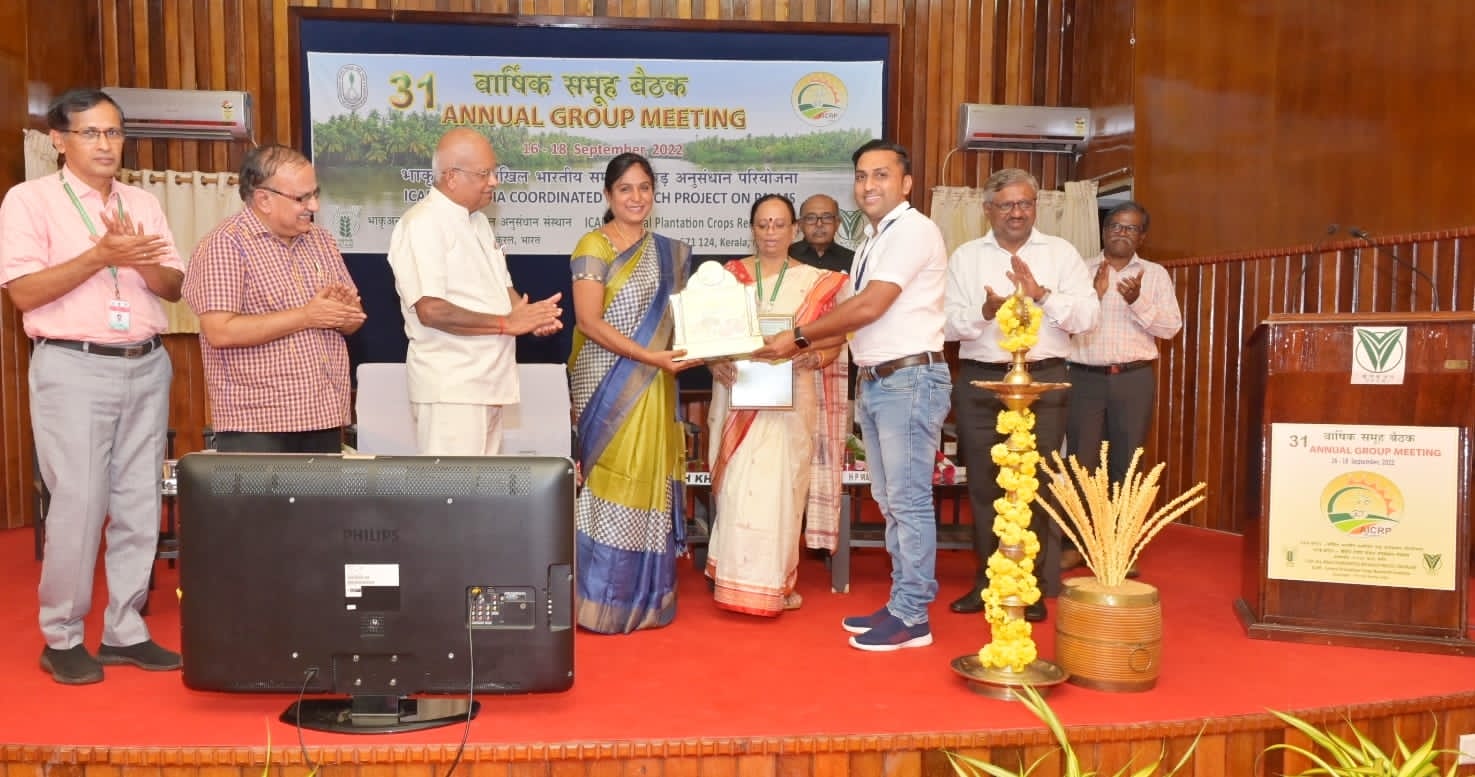